The basics of setting up Hyper-V after a base Windows Server 2008 installation (64 bit) and shows how to install roles, configure basic settings and create a VM.

With the launch of Windows Server 2008, along comes a new component to compete directly in the virtualization space. For those of you familiar with Windows Virtual PC or Virtual Server, you can now work with a new role in 2008 called ‘Windows Server Virtualization’. Nicknamed ‘Hyper-V’, 2008’s role in virtualization comes at a time where it is sorely needed as many Microsoft camps have been defecting over to VMware as well as other vendors. With many competitors taking market share, Microsoft’s direct answer is Windows Server 2008 Windows Virtualization role. In the past, Virtual PC and Virtual Server were utilized to run multiple operating systems on the same computer. Now, Windows Server 2008 provides you with very useful and powerful methods of running multiple virtualized operating systems.

Virtualization can be a confusing topic to those new to computer system as well as those working in the field as advanced technicians. Virtualization is best understood by considering that all systems in your virtual infrastructure are available to any systems who request it and therefore those resources could potentially run out. By using virtualization, the physical characteristics of a host system are now kept hidden (or transparent) from the way in which other systems and applications interact with it.

For example a single server, operating system, application, or storage device may need to appear to function as many logical resources. Virtualization is achieved in Windows Server 2008 by the installation of Hyper-V and the creation of virtual machines or ‘VMs’.

Virtualization is a broad term and can lead to more confusion as more components are virtualized and added to your infrastructure, or to help create the infrastructure. A great example is the virtual switch and networking. The trouble with working in a virtual environment is that is can be tricky to understand all the different types of virtualization, how they are configured and how they interact with the system when you configure them for use.

There are currently three major types of virtualization that are available for use with Windows Server 2008 with Hyper-V role installed. They are server, network and storage virtualization.

Server virtualization is what we have been explaining up until now; you are creating a virtual environment out of physical resources in which slices of each resource can be given to specifically configured hosts. By building your servers in a cluster (as an example) and scaling up your systems with hardware and power, you can exponentially grow your resource pool and virtual infrastructure as needed.

To most users using a computer on a network, the network should be transparent to the user. All resources on the network should appear to be part of the computer sitting on the user’s desk. When you take physical network resources and create them in a virtual environment (such as virtual NIC’s and connectors) you achieve network virtualization. This effect is achieved by installing software and services to manage the sharing of storage, computing cycles and applications. Network virtualization can help to reduce the cost and burden of running data centers and corporate networks by making both hardware and software more efficient. Servers can share their processing power, for example and applications or components. Data center managers will be able to manage computing and storage capacity more effectively. Windows Server 2008 comes equipped with integrated virtual switches to help you accomplish this.

Network virtualization is an innovative approach to providing an isolated networking environment for each group within the enterprise. Each of these logical environments will be maintained across a single shared network infrastructure. Each network allows for the corresponding group of users to have full network access similar to those provided by a traditional network. The overall goal from an end-user perspective is having access to an always accessible transparent dedicated network with individual resources and independent security policies. So in short, network virtualization requires the logical division of all network devices and network services.

Let’s take an overview of what key elements comprise a virtual network:

Servers on the network can access a SAN (Storage Area Network) regardless of where the storage area is or what operating systems it’s running. In most storage virtualization systems, a virtualization “router” intercepts commands from a server, and then redirects those requests to the appropriate storage device.

Understanding the Components of Hyper-V

With Windows Server 2008 Microsoft introduced a next-generation hypervisor virtualization platform. Hyper-V, formerly codenamed Viridian, is a key feature of Windows Server 2008. It offers a scalable and highly available virtualization platform that is efficient and reliable. It has an inherently secure architecture. This combined with a minimal attack surface (especially when using Server Core) and the fact that it does not contain any third-party device drivers makes it extremely secure. It is expected to be the best operating system platform for virtualization released to date.

Compared to its predecessors, Hyper-V provides more options for specific needs because it utilizes more powerful 64 bit hardware and 64 bit operating systems. Additional processing power and a large addressable memory space is gained by the utilization of a 64 bit environment. It also requires no need for outside applications which increase overall compatibility across the board. Hyper-V has greater deployment capabilities to past versions and provides more options for your specific needs because it utilizes specific 64 bit hardware and a 64 bit operating system. Additional processing power and a larger addressable memory space is gained by the utilization of a 64 bit environment. Hyper-V has three main components: the hypervisor, the virtualization stack and the new virtualized I/O model. The hypervisor also know as the virtual machine monitor, is a very small layer of software that is present directly on the processor which creates the different “partitions” that each virtualized instance of the operating system will run within. The virtualization stack and the I/O components act to provide a go between with Windows and with all the partitions that you create. All three of these components of Hyper-V, work together as a team to allow virtualization to occur. Hyper-V hooks into threads on the host processor which the host operating system can then use to efficiently communicate with multiple virtual machines. Because of this, these virtual machines and multiple virtual operating systems can all be running on a single physical processor

The hypervisor creates partitions that are used to isolate guests and host operating systems. A partition is comprised of a physical address space and one or more virtual processors. Hardware resources such as CPU cycles, memory and devices can be assigned to the partition. A parent partition creates and manages child partitions. It contains a virtualization stack which controls these child partitions. The parent partition is in most occasions also the root partition. It is the first partition that is created and owns all resources not owned by the hypervisor. As the root partition it will handle the loading of and the booting of the hypervisor. It is also required to deal with power management, plug and play and hardware failure events.

The hypervisor is also designed to provide availability guarantees to guests. A group of servers that have been consolidated onto a solitary physical machine should not hinder each other from making progress for example. A partition should be able to be run that provides telephony support such that this partition which continues to perform all of its duties regardless of the potentially contrary actions of other partitions. The hypervisor takes many precautions to assure this occurs flawlessly.

Now that you understand the basic layout (and uses) of Hyper-V, we will look at how to install the role.

As you have seen so far in this chapter, Hyper-V is a versatile new feature for Windows Server 2008. Before explaining how to create, configure and delegate hard drive space to virtual machines you must first be able to install the Hyper-V feature to your machine. Hyper-V has many prerequisites that must be met before installation can occur. We will now discuss the proper method for installing the virtualization features of Hyper-V.

In order to utilize virtualization you must have a clean install of Windows Server 2008 Enterprise with Hyper-V installed onto the host machine. Remember that Hyper-V requires 64 bit hardware and a 64 bit version of the operating system. You must also ensure that you have hardware assisted virtualization enabled prior to installation. If BIOS configuration changes were made to the machine to enable these features, a full cycle power down must be completed to proceed. Once we are sure all of these pre-requisites are met, we can go over the steps required to install Hyper-V.

This is the procedure for installing the Hyper-V role on Windows Server 2008: 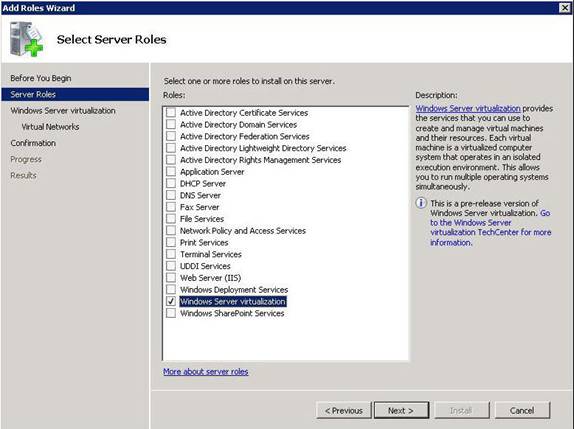 With the launch of Windows Server 2008 we have a new component to compete directly in the virtualization space against VMware and others. For those of you familiar with Windows Virtual PC or Server, you can now work with a new role in 2008 called ‘Windows Server Virtualization’. Nicknamed ‘Hyper-V’, 2008’s role in virtualization comes at a time where it is sorely needed. With many competitors taking market share, Microsoft’s direct answer is Windows Server 2008 Windows Virtualization role. In this article we looked at the fundamental knowledge you will need to know or understand to begin working with Hyper-V, as well as how to install the role to get started. In future articles we will look closely at advanced configurations, how to create VMs and install guest operating systems and much more.