How to deploy Windows Nano Server on vSphere

Windows Nano Server is a super lightweight version of Windows Server that was “built for the Cloud”. When I first heard of it I immediately became curious, because it resembles VMware’s ESXi in many ways: It is an embedded-like and headless system with a very small footprint and can be managed only remotely. It has limited use cases, but two of them are acting as a fully-featured Hyper-V virtualization host and as a container host.

You cannot install Nano Server via a bootable setup CD like other editions of Windows Server, but it comes with its own Powershell based deployment framework. It will output a Windows WIM file or a Hyper-V virtual disk file in the old vhd or the newer vhdx format. The image needs to be converted to a VMware vmdk file, and then it needs to be uploaded to an ESXi host and attached to a newly created VM.

The following steps have been tested on a Windows 10 workstation and an ESXi 6.0 U2 host. It should also work with Windows 8.1 and ESXi 5.5 though (maybe with minor modifications).

2. Get the latest VMware vmxnet3 and pvscsi drivers

Download the latest VMware Tools for Windows (x64) in exe format. At the time of this writing this was version 10.0.9. Perform an administrative install of the package by calling it with the /a switch, e.g.:

This will not actually install the Tools on your local system, but extract all files in a directory that you specify in the upcoming GUI: 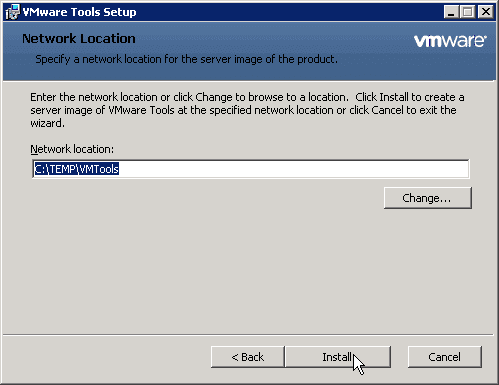 In this example we use the directory C:\TEMP\VMTools. Make sure that C:\TEMP already exists or use another existing parent directory.

Now create a new directory C:\TEMP\Drivers and copy the extracted pvscsi and vmxnet3 drivers to there. In a command prompt run

To clean up you can delete the C:\TEMP\VMTools directory again now. We do not need it anymore.

Mount the Windows Server 2016 TP5 ISO to make it available as a Windows drive (In Windows 8 and 10 you just need to double-click on it in Explorer to accomplish this). In the following examples I assume that it has been mounted to E:. Adjust this as needed.

Now open a Powershell window as Administrator and run commands like the following:

The first command imports the NanoServerImageGenerator Powershell module from the TP5 ISO. The second command creates the image. Here is the meaning of the most important switches:

… and this is how the output will look like: 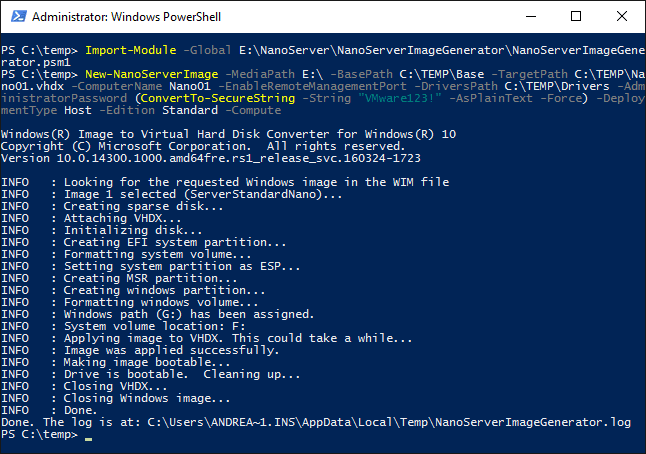 As you will have noticed I chose to create a vhdx file rather than a vhd file, because it is more modern: It uses the GPT partition format and an EFI boot partition. Using vhd instead will also work perfectly fine. I just like to be on the cutting edge 🙂

For converting a vhdx file to VMware format there is really only one straightforward way: Use the free Starwind V2V Converter Tool. It requires a registration to download and must be installed, but it is simple enough to use and just does the job. When using it select VMware ESX server image as the Destination image format: 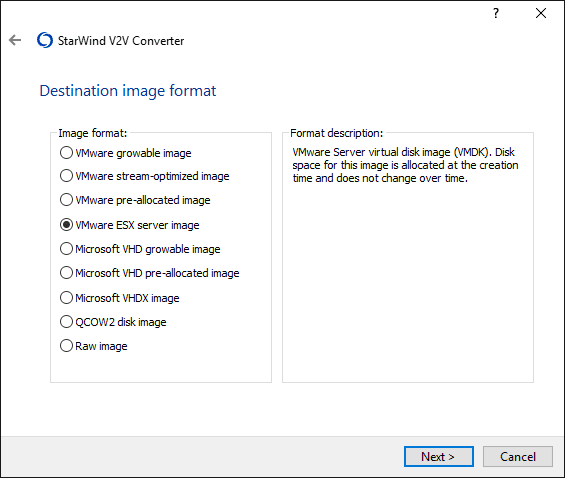 This will create two output files, a small metadata *.vmdk file and the actual disk file *-flat.vmdk (with 4 GB size).

Create a new VM on your ESXi host with these options:

After creating the VM edit its Advanced Options / Boot Options and select EFI as the boot firmware (this is only needed when you used the vhdx disk format like I proposed): 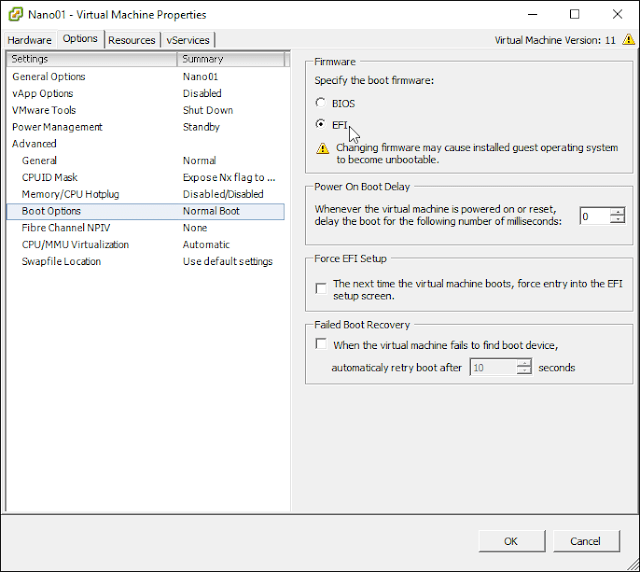 Now upload the two vmdk files that were produced by the Starwind Converter tool to the ESXi datastore directory that was created for your VM. Edit the VM and add the uploaded disk as Existing virtual disk and Virtual Device Node “SCSI (0:0)”. You must use the legacy vSphere Client for this step! I tried with the new HTML5 Host Client fling, but due to a bug in it you can add the disk only as type IDE there.
Finally change the type of the SCSI controller that was automatically added with the disk to VMware Paravirtual (pvscsi): 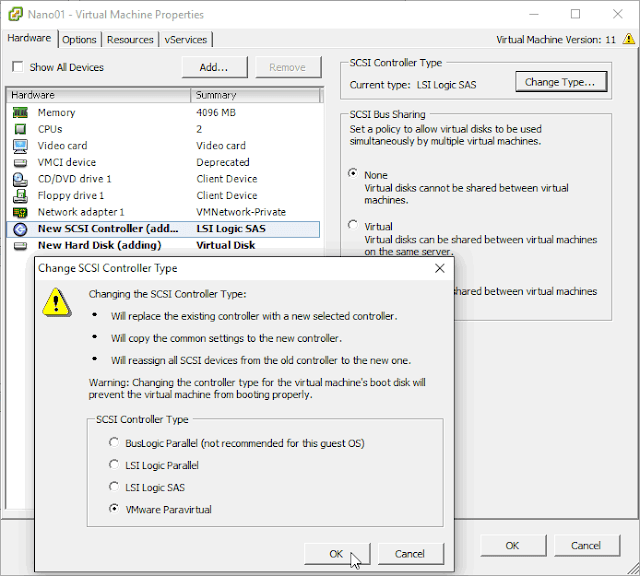 You have now created your first Nano Server VM on vSphere and are ready to power it on! It will only take two or three seconds to boot and will greet you with this minimalist login screen: 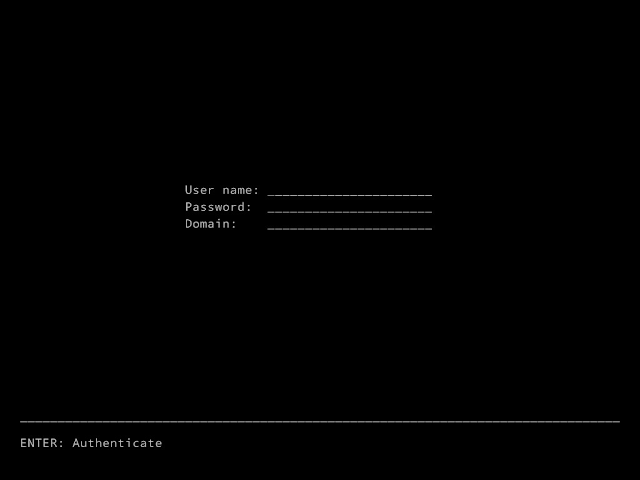 This is “only” a guide for deploying Nano Server on vSphere (using the most modern options), but not a guide to using it. There is tons of good documentation already available for this, your starting point is here: http://www.aka.ms/nanoserver.

Only one note: If you want to try out using Nano Server as Hyper-V host then you need to enable nested virtualization for the VM by

while the VM is powered off.

On standalone ESXi hosts this can be done nicely using the new HTML5 Host Client (already included in ESXi 6.0 Update 2 and later): 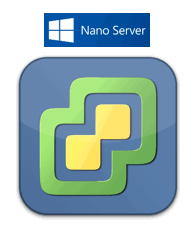